these are the people who make the music that sounds so sweet.......lovely boys, one and all 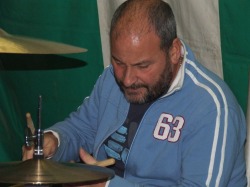 Gary Shag is one of the most accomplished and revered stickmen this side of the eqautor. With hands faster than a Chinese noodle maker, he can shuffle and rock with equal aplomb. Also a talented singer - his velvety larynx is a much underused weapon in the Fugitives armoury. A superb chef of Asian specialaities, The Shag is also known for his natty cardigans and woolly hats. We have him on long term lease from Sassafras, for whom he still plays. Won a Brit award for his monolgue "The Hammerman Joke" - the most unforgettable 3 minutes of our lives. 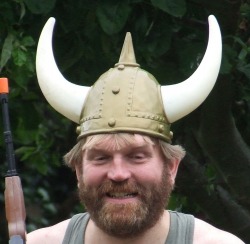 Guitars, posh ones. Sings in a Llanelli delta blues voice, which has been matrinated in leeks and lavabread and then hung out to dry in a barrel full of SA, then taken outside and stamped on in muddy boots. Likes dressing up as famous historical war heroes. This is Erik the Viking, below is Private Godfrey. Likes hats, wears them all the time.Likes daps, has lots of pairs. Phonomenally talented chronichler of Welsh Rugby, and holder of the largest collection of scrumcaps in North East Whitchurch. Has a well documented eclectic love of all things musicial, so long as it British based Blues music from Cheshire 1967-69.Showed me how to make nice gravy once, and I have never looked back.Shaves his beard off every Christmas eve at 2.30 am, and goes through a well established routine. Abraham Lincoln, Noddy Holder, Poldark and then finally, the lovely looking boy that his Mum loves the most. 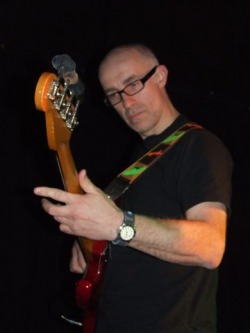 Caravanner of the Year 2008. Very very fashionable, his Man at Peacocks range will be available on this site soon. Has new glasses which now longer fall off when he sweats. Has a seriuos ailment called "AMERICAN - ACCENT - WHEN NEAR - A - MICRPHONE - ITIS". This is very painful ( for everyone else) and happens usually when he wearing his cowboy hat and he says things like "Yahoo" and "Squeal like a pig". He has a suit by Levi Strauss made entirely out of cardboard. The last time he wore it he was arrested for Rustling.Once got bitten by an Emu on holidays. Like ice skating, and those who know him well will be aware of his magnificent Lutz. Makes lovely trimmed curtains for a reasonable price so long as you buy him the material. In no way clumsy. 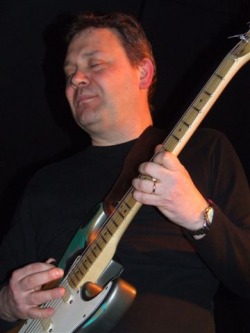 ﻿We were pleased to pick up the Ferret in the summer transfer window. A stalwart of the great TS BLUES BAND, he joins with great raunchy guitar playing, a cherubic face and a voice like an angel.He has the most famous extension in Cardiff, and is an unwitting TV star. Comes from Ebbw Vale, which explains why he always wears an anorak. An accomplished drinker, but not of alcohol. Went down with a nasty tummy bug after his first Fugitives Christmas party. Has a sewing machine.Looks 10 years younger than he actually is. He is 67.﻿